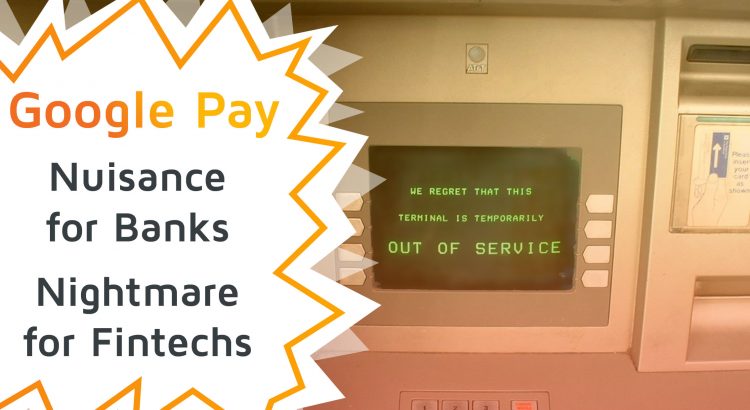 When pondering on digital transformation in the financial industry, one quote by Bill Gates comes to mind. Admit it, you know which one. It just fits perfectly, as we see tech giants leave their mark with emoney payment solutions like Google Pay and Apple Pay. Bill Gates said:

We need banking, but we don’t need banks anymore

He said this in 1994. The millennial generation probably did not listen to his words back then – living the kid life requires full attention. But today, millennials resonate very much with Gates’ words. According to research by Global Banking Insights, at least one-third of all US millennials believe that they will soon live a life without banks.

And they might have a point. The number of customers inclined to use online banking services has doubled over the last 10 years. As a result, the demand for digital finance applications increases — and quite a few banks struggle to deliver on that front. The internet is not their native environment. Fintech companies try to capitalize on this, using their technological expertise to disrupt the tried and true ways of banking.

Some of them, like Germany’s N26 or United Kingdom’s , are successful with this approach. Not only the unicorn roam wild and free, though: Investments in fintech companies almost quadrupled over a course of five years. It would be one-dimensional, however, to sell the rise of fintech as a pure success story. For once, many fintechs face the same regulatory challenges as banks. In addition, their small size and lack of traditional enterprise value make it difficult to gather momentum.

Fintechs have the technological advantage. Banks have resources and reputation. Both face a competitor who musters all those qualities. It leads us back to Bill Gates and 90s tech.

The Way of Google Pay

One year after Gates sung the banking industry’s swan song, BackRub entered development. It would become popular as a web search engine under a new name a few years later: Google.

Today, Google has left behind these humble beginnings. Its influence can be felt in many technology-heavy industries, mainly in the services sector. Banking and payment count among these of course and Google catered to these services by publishing the Android Pay application. Last year, the merge of the Android solution with the Google Wallet service finally created Google Pay.

What makes banks sit up is, that Google now is allowed to enact the following services in the whole European economic area:

Being used to the competition by fintech companies, that’s nothing new under the sun for banks. Also, an emoney license does not match a full banking . Google Pay is not allowed to lend money or add interest. But still, it all hints at a profound change in the banking business. One in which Google is not the sole forerunner.

To forestall any expectations: This is not the title of an obscure animated 90s sitcom – we have left this decade for good now. AFA (minus the G for Google) stands for Apple, Facebook, and Amazon. BAT, on the other hand, denominates the bis Asian fintech companies Baidu, Tencent Alibaba. Aside from Google, these tech companies make their presence known in the digital finance sphere.

In regards to emoney licensing, Google is a late starter even. In 2016 Facebook already obtained a license in Ireland. Amazon got one from Luxembourg, enabling their product Amazon Pay to enact transactions outside Amazon’s own marketplaces.

Tencent is currently lacking emoney licenses for the European market. Yet, Alipay recently obtained one in January 2019. Furthermore, it’s worth noting that providing such licenses to smaller competitors from China is not unheard of in the EU, either. In November 2018 it was the Bank of Lithuania, who furnished the Chinese payment company  with such a license. Having the known Chinese competitors enter the market might be just a matter of time. Some of them already cooperate with European PSPs, like Alipay with Concardis.

Now, with all the apps and emoney licenses, one question suggests itself: What’s in for Google Pay and the er Valley tech companies?

One ruled-out answer: The hope of generating huge profit as the bank to end all banks. As Forrester suggests in a 2014 report: It might not be worth the effort for GAFA companies. Founding a full banking institute comes with high costs and strict regulations. Let alone that many customers feel tech giants rank behind banks in terms of expertise and trustworthyness in financial matters.

Instead, Google Pay and its peers will likely concentrate on their core business: Information processing. Which then boils down to the ins and outs of Big Data. Google already has an extensive collection of user data at its disposal. As payment providers, they can enrich those existing datasets with information on customers’ transactions and purchases. This opens up possibilities for new services. Google Pay could be connected to financial advise platforms for example. Or it could give out advertisements catered specifically to the financial situation of a user.

And users really don’t seem to mind either. One third would provide Google access to their personal data in exchange for lower fees or other financial incentives.

In this regard, it’s perfectly possible that the GAFA companies are not competing against banks. They might rather be seeking to cooperate with them – which is easy for them, making use of PSD2.

This is bad news for fintech companies actually, as Google, Amazon Apple could turn out to provide all the technological disruption banks ask for. They have the size and resource-heavy line-up, fintech SMEs cannot compete with. They are more widely known as companies, enabling them to quickly find users for their platforms.

And lastly, they have the advantage of the unique perspective customers have on tech companies as a whole. In a Banking 2025 Study for the Frankfurt School of one thing became apparent: Customers compare banks to banks and software firms to software firms. And they see fintech companies as software firms, just like the GAFA companies. That the Silicon Valley giants have a reputation of expertise in the software sector is nothing to argue about.

It’s true that not all fintechs have to freeze in fear facing the prospect of GAFA ramping up their financial services. Many fintech unicorns stride along the winning ways: N26, Monzo, Starling, Transferwise and just recently obtained full banking license from – you guessed it – the Bank of Lithuania. Actually, according to a study by ComDirect, most fintech companies don’t expect their revenues to drop as Google Pay and others appear on the stage.

For banks, it’s exactly the opposite. But their worries may turn out as unsubstantiated. Chris Skinner put it perfectly, as an answer to the Bill Gates quote given above:

You see, banks are trusted stores of value.”

And if there is one truth to the financial industry, it’s that trust is the most valuable currency.

If you are searching for a reliable partner in software development for financial applications, you can fully trust in us: trimplement looks back on many years in experience in creating emoney and cryptocurrency solutions, which are applied on the international market. We can tell you more on our company page.