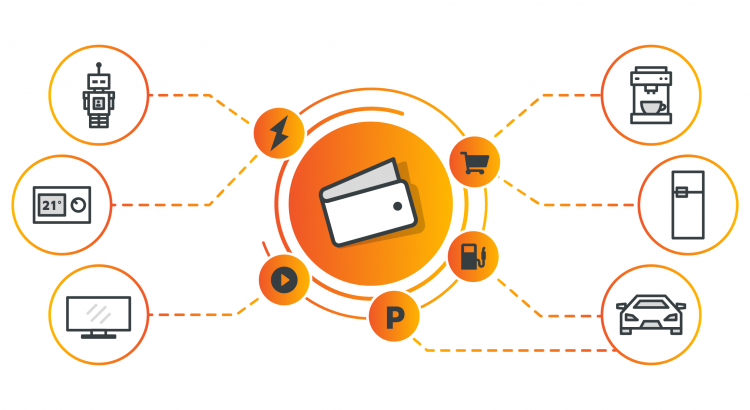 If the rooms had ears and the furniture had mouths … oh, how would they slander about our habits behind our backs?

Well, they can already talk to us for once: Voice-controlled assistant devices like Alexa and Siri inhabit our private spaces just now. And we can easily picture them having a conversation with each other, too (even though it would be a funny one for sure). But what if our clock radio told our food processor to get that smoothie ready, for we are about to leave for work? Or our watch told our bathtub to run us a remedial bath because we’re leaving our workplace with the first stirrings of a common cold? And think of a fridge, buying food articles once it runs out of them, using its own ewallet…

That’s where we enter the domain of the Internet of Things – a domain ripe with opportunities for fintech companies.

What is the Internet of Things?

Put , the IoT or Internet of Things is a network of everyday devices, which are interconnected via WiFi access. Those devices — which can be anything from cars to coffee makers, from streetlights to shower cabinets — communicate. And that means, they share data to complement each other in smart ways.

More importantly though: They are not mainly dependent on our input anymore. Modern IoT-capable devices use sensors to monitor and analyze routines and proceedings (and our habits) around them, evaluating them via algorithms. Once the device senses a need for its services, it takes appropriate measures. And as it’s exchanging information with other devices in the cloud, the incentive to act can come from outside.

It can come from far outside, that is. The Internet of Things is not limited to the user’s own four walls. Many Smart Homes added together make Smart Cities.

The possibilities of the Internet of Things are endless, basic examples include:

The dimensions of today’s Internet of Things are already significant. By now, the IoT devices in use outnumber the world’s population. Analysts at Gartner are certain, that in the year 2020 a network of more than 20 billion devices will cater to our needs.

International corporations like Amazon, Bosch, Samsung and GE already invest in the IoT vision — with vibrant start-ups on their heels or even one step ahead. Now, traditional financial institutions as well as upstart fintech companies jump on the bandwagon.

It’s clear why they do it: Customers are placing more and more value on user experience and convenience. And many future applications of the Internet of Things require integration of financial services and fintech procedures. Smart fridges for example, that automatically order food once it runs short, or parking spaces, whose fees are paid for by our smart cars, need to be connected to their owner’s bank account. Enhancing the basic payment applications coming with the device, branded apps by banking institutions could attract new customers. They could by offering high-security eWallets with more payment options, additional privacy settings even loyalty programs.

With the commencement of PSD2 (Payment Services Directive), the legal foundation has been laid for third parties requesting account data, should customers agree with it — a prerequisite for IoT and fintech startups challenging traditional banks. It’s clear: The big institutions must react now.

Consequently, banking would no longer occupy a different space than living — it would take place at home, linked to natural, everyday actions. Looking at the rise of internet shops and online banking, we can argue, that future customers won’t leave their homes for banking if they don’t absolutely have to. Convenience is king, and the institute providing the most convenient user experience in IoT transactions leads the way.

And even when customers are outside their own four walls, the Internet of Things is within arms reach. IoT banking and fintech services make their lives easier. ATM machines give out money to them without the need for input. Long waiting times at the counter will be a thing of the past. The bank already knows, when you’re coming along and shifts customers in line to guarantee quick service.

And as your credit card connects to your phone and your household, it will be a lot harder for fraudsters to steal your identity: Shouldn’t there be the signal of the car or the washing machine of that user account nearby? Access denied!

eWallets, Blockchain and the Internet of Things

The Internet of Things is already growing around us, adding new smart devices to its massive IoT ecosystem by the day. Physical wallets start to look antiquated — except as containers for our driver’s license and credit cards. Contactless Payment, powered by Near Field Communication, is likely to become the standard way how we conduct business. In Europe nearly half of all consumers already rely on eWallet payment methods, says Statista. In the future we might not even need smartphones, laptops or tablets anymore: Wearables like smart watches or wristbands — and implanted microchips, for that matter — interact with Bluetooth beacons or WiFi access points to complete payments. Versatile ewallet and financial technology will be a crucial element of the Internet of Things.

In regard to security, ewallet providers face great challenges. IoT networks allow interaction with user accounts and sensible bank data through everyday devices — cyber-criminals will not wait to jump at the opportunity. Any IoT ewallet worth the name will have to raise effective barriers against fraud and tampering. The designs and applications of IoT devices are manifold and in some cases depend on very delicate user data (think health technology). Providers of eWallets have to the security strategies of their payment software accordingly.

A solution, that holds big promises for the Internet of Things in regard to security is blockchain. Blockchain was originally developed as an integral part of the cryptocurrency model. It is a distributed ledger technology, there is no central instance or data storage. A blockchain is a continuously growing record of so-called blocks, containing sets of transactions. All blocks contain a timestamp and a hash pointer linked to the previous block. As such, they are public and can be tracked down to the very first so-called “genesis block”, the first transaction made in the chain. However, blocks don’t give away the identities of the purchasing and receiving parties in a transaction.

Blocks, the sets of transactions, must be validated, before they are added to a blockchain. This is done via a specific cryptographical procedure. Each block poses a unique mathematical problem, a nonce. All peers in the blockchain system compete to solve this nonce with their CPU in a trial and error process. This process is called mining and peers working to solve the puzzles are called miners, accordingly. Once a miner discovers the right solution for the mathematical problem, it announces the validation to the network. The block is then added to the blockchain. Thus, validation is a decentralized process, that’s very difficult if not impossible to elude. The blockchain is public, so tampering with a block would be apparent, as all peers have deviating records.

Experts are certain that blockchain technology will gather pace this year as part of IoT development. Some of them raise the subject of limitations. For example, adding a new block to the bitcoin blockchain currently takes about 10 minutes. Furthermore mining nodes requires vast amounts of electricity and CPU to verify blocks.

But new blockchain-based or blockchain-inspired solutions for known problems wait around the corner. One example would be the Tangle ledger of IOTA: It takes blockchain principles to the next level, banking on a system protocol with a different manner of processing. Tangle, a “blockless” distributed ledger, allows the parallel and simultaneous verification of transactions, as opposed to a “one block at a time” model. With IOTA, a cryptocurrency geared towards of Things usage, the Tangle technology is making up for the shortcomings of the blockchain.

Performance concerns regarding blockchain and fintech will continue to occupy the industry in 2018. But there are a few other trends and issues affecting fintech and the Internet of Things to look out for.

First and foremost, usage of data will be a big topic. Given that sensors in IoT devices constantly draw data from their surroundings, it’s vital to implement functional systems for data analyzation. Accordingly, data infrastructure automation will be a deal-maker for companies focussed on the Internet of Things — artificial intelligence is a buzzword here. Looking at the sheer amount of data transferred, edge networking solutions for difficult environments will be in high demand, too. In regard to these requirements, as-a-service software providers can expect a good business year.

And that’s just the tip of the iceberg in an ocean of innovations the Internet of Things holds for us. Within only a few years, fintech firms will occupy new access points, as our contact with online services will fundamentally change.

“Alexa, don’t get too comfortable.”