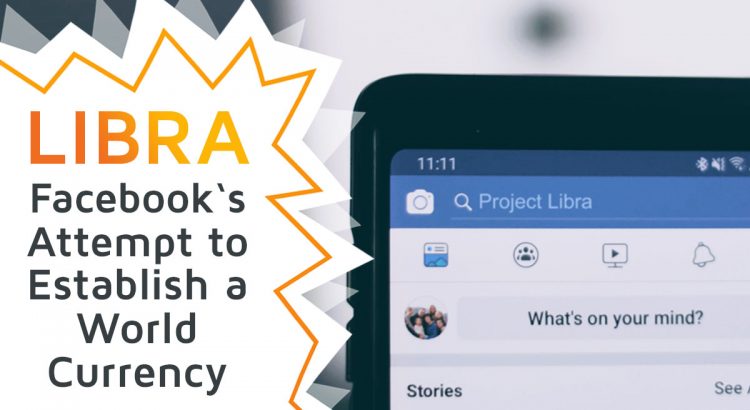 Since project Libra was revealed by Facebook two weeks ago, it sparked controversial discussions around its potential as an international currency, its presumed economic impact, and its technical implementation.

In this article I will try to shed some light on the technical and the economic sides of the project, to see whether Libra has the required momentum to become Facebook ́s next-generation revenue booster and a meaningful (and powerful) currency for the masses.

Let’s take a look at the Libra project from an economic perspective first and the impact it may have on the future of financial markets.

Libra is not pegged to USD. Libra is intended to be a stable global currency.

Stablecoins like Tether are usually pegged to fiat currencies like USD or EUR. They are in essence a 1:1 digital representation of the customers’ assets in fiat. This is not true for Libra. Libra will be backed by a basket of assets to keep its price stable. The exact exchange rate to traditional currencies is yet unclear at this point and so are the assets the basket will hold.

Through this setup, Facebook intends to give Libra intrinsic value and turn The Libra Association, the NPO behind Libra, into the likes of a private central bank at a global scale.

Here are a few thoughts, given Libra scales as expected.

For the first time, we are going to see the likes of a private central bank to compete against national central banks on a big scale. While Libra probably isn’t too big of a threat for central banks issuing dominant fiat currencies like the EUR or USD, it may become a new safe haven for people plagued by inflation and the ultimate solution for the 1.7 billion unbanked.

Developing countries’ central banks will face stiff competition from a new, well-funded global player. A few will think twice before attempting to devalue the national currency. If things get out of hand, some may block Libra or Facebook altogether to stay in control of the monetary power. In the meantime, rich economies will stand at the sidelines and watch it unfold to better assess the risks for their own economy.

A number of central banks have already announced they will block Libra when it launches and the US House Financial Services Committee officially requested Facebook to agree to a moratorium on any development of Libra until the impact of this project is fully understood and appropriate measures are in place to control it. I would’ve thought Facebook had done the required homework here, at least for their home market. Apparently not.

Where does the interest gained from customer assets go? Facebook made it clear: interest won’t flow into Libra. It will be used to “cover the costs of the system, ensure low transaction fees and pay dividends to investors who provided capital to jumpstart the system”. It’s simply too big of a revenue stream for Facebook and the node operators to pass up on. There is also a potential risk for Libra to be considered a security by the SEC if interest were paid to customers.

In the long run, though, interest might be a tool to market Libra into richer economies, where people do not have a desperate need for alternatives to their local currency, but rather look for new opportunities to invest.

The basket giving Libra intrinsic value will be a powerful tool for Facebook.

“Libra will be backed by a collection of low-volatility assets, such as bank deposits and short-term government securities in currencies from stable and reputable central banks”.

The asset ratio surely won’t remain constant as it needs to move with the markets to keep the price stable. In consequence, The Libra Association needs to trade these assets, which will catapult them into the top league of capital markets players.

Personally, I am wondering what other assets will be considered for that basket in the long run and whether The Libra Association may decide to completely drop fiat currencies at some point. This would truly turn Libra into an international and privately issued currency.

This is probably going to be a hard nut to crack for Facebook.

When traveling abroad, we convert prices into our local currency because we are used to valuing things in our day-to-day currency. Most will find it difficult or confusing to value a cup of coffee in Libra if it does not have a 1:1 (or similarly simple) exchange rate to their home currency. An easy-to-understand exchange rate will only work for one market, the rest needs to calculate with decimals.

This worsens today’s user experience and is one of the reasons Bitcoin never worked in commerce. No one (except for the nerds among us) is willing to pay 0,00033 BTC for a coffee (at press time). Because the value for money cannot be easily understood (without a calculator at hand), volatility aside.

The only way I think this can be solved is when Libra operates in the background and the UI experience remains in the user’s local currency. This is currently not the case with Calibra.

As part of its efforts to maintain compliance, the Calibra wallet will require ID verification. Financial data will not be linked with social media profiles the company claims. Given Facebook’s recent scandals though, I leave it up to you to judge on that promise.

In my opinion, it is the next step towards Facebook’s long dreamed goal to get rid of fake profiles and hold verified (and valuable) user accounts only, enriched by the customer’s financial data and spending behavior.

The Technology Behind Libra

In the whitepaper, you stumble across the following line very early on:

“The world truly needs a reliable digital currency and infrastructure that together can deliver on the promise of ‘the internet of money.’”

The “internet of money”. Facebook makes it clear, they do not plan to utilize existing financial rails to process payments in Libra, but instead, aim to establish a whole new infrastructure to compete against traditional financial systems and institutions. Financial transactions like remittances, person-to-person payments, and currency exchange are promised to be free of charge for the consumer, which is a bold statement and a declaration of war against PayPal and WesternUnion.

Facebook’s massive customer base clearly has the power to establish its envisioned “internet of money”, if they embrace the idea and Libra as their preferred digital currency for daily use.

“The Libra Blockchain is maintained by a distributed network of validator nodes, also known as validators. The validators collectively follow a consensus protocol to agree on a total ordering of transactions in the blockchain.”

The validators, Facebook refers to are selected major organizations that paid a $10m buy-in fee to run a node and become a validator in the network. Thus, Libra needs to be understood as a permissioned blockchain, where in contrast to Bitcoin, control over transactions is held by an exclusive members club and not the open public.

“Validator nodes decide which transactions will be added to the blockchain and in which order.”

One needs to understand that Facebook is trying to get a financial product for the mass market on the ground here. That does not come without compromises. Financial regulation requires organizations to comply with things like sanction lists and anti-money laundering regulations. The path Facebook chose to follow is a balancing act between radical innovation and compliance. The latter always was, is and will remain key to the successful rollout of a financial product.

Calibra is a custodial wallet and comes with built-in key management, so you don’t have to worry about how to keep your keys secure.

The protocol does also allow to store the account keys locally. This is a plus. Sort of  – although you are in control of all the Libra in your wallet, the validator may still block incoming and outgoing transactions to/from your wallet if regulatory rules are violated.

“In LibraBFT, validators receive transactions from clients and share them with each other through a shared mempool protocol. The LibraBFT protocol then proceeds in a sequence of rounds. In each round, a validator takes the role of leader and proposes a block of transactions to extend a certified sequence of blocks that contain the full previous transaction history. A validator receives the proposed block and checks their voting rules to determine if it should vote for certifying this block. These simple rules ensure the safety of LibraBFT — and their implementation can be cleanly separated and audited.”

Similar to traditional cryptocurrencies, the Libra blockchain operates a mempool to queue transactions before they get included in a block and broadcasted to the network by the leading validator node. The slower the network, the higher the number of transactions waiting for execution and the longer the waiting time for the customer to see the transaction fully executed.

Mempool transactions are processed by sequence number, not gas price (execution fee). This ensures fair processing for all customers and does not allow to achieve prioritized processing through higher fees.

With Libra, Facebook also introduced Move, a new programming language, based on Rust and designed to manage digital assets and write move modules (smart contracts). It got an overall positive response from the developer community.

The Move features standing out most are:

“Move must reject programs that do not satisfy key properties, such as resource safety, type safety, and memory safety. How can we choose an executable representation that will ensure that every program executed on the blockchain satisfies these properties? Two possible approaches are:

(a) use a high-level programming language with a compiler that checks these properties,

(b) use low-level untyped assembly and perform these safety checks at runtime.

Move takes an approach between these two extremes.“

Project Libra is a well-thought-out project by the former president of PayPal, David A. Marcus, aiming to revolutionize the financial world by establishing a customer-oriented product that benefits from the innovation Bitcoin introduced in 2009. I wouldn’t be surprised if it becomes a huge success. Here’s why:

Unlike other cryptocurrency projects, Libra already has the required customer base to, almost instantaneously, become THE new standard for online payments, remittances, etc.

And it also addresses regulatory compliance to some extent.

Achieving global regulatory compliance will be a herculean task for Facebook to solve. The requirements vary from country to country and most governments will see Libra as a direct competitor to their national currency. If that is the case, regulatory compliance simply won’t be enough, Libra may be classified as a threat to national security, as the US Financial Services Committee laid out in their latest moratorium letter to Facebook.

Libra does not and will not compete against Bitcoin, it will become (if allowed by governments and embraced by the community) a strictly controlled financial environment, operated by large organizations, where user-generated data remains the most valuable asset. Bitcoin at the same time will remain open, censorship-resistant and scarce, transforming more and more into a deep liquidity network with second-layer payment applications.

Mark Caruso is a senior project manager and agile coach at trimplement – wearing the “compliance hat” on top of it all. Mark is especially passionate about fintech and cryptocurrencies, using his unique expertise to bring projects with international customers to a successful and target-oriented end.