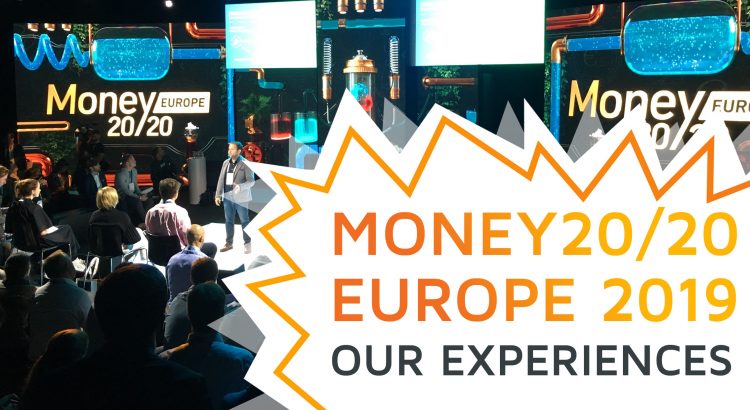 You have a block of lead. You want a block of gold. How to get from one to the other has bothered the alchemists of old. We learned that such effort is pointless. We know more dependable ways to distill money. The formulas have changed: They are written in code and algorithms rather than ink. They manifest inside banking apps, online marketplaces or blockchains rather than flasks in a candlelit laboratory. And they drive thousands of people from all over the world to gather at the Money20/20 conference in Amsterdam just to show, discuss and innovate them.

Our co-founders Natallia Martchouk and Matthias Gall were among those modern “alchemists of finance”. From June 3rd to 5th 2019, they had traveled to Amsterdam. The mission: Meeting with other movers and shakers of the fintech, payment and banking industry.

Experimental Setup – Money20/20 at a Glance

Entering the RAI conference hall in Amsterdam, where Money20/20 Europe 2019 took place, felt like being dropped into an experimental assembly by Bill Nye. In the halls and meeting rooms, the alchemy motive really showed. When it comes to small details, at least. We spotted huge glass bulbs. Vials with indefinable, neon-green contents. Retorts with morphing digitally projected bubbles within – just no name a few.

However, that’s where the similarities with those flashing and smoking TV science experiments ended. When compared to last year’s circus theme, Money20/20 Europe 2019 felt a little empty and bereft of activity. We actually missed the costumed performers of 2018 a little. Alchemical stage magicians running around, producing colored steam and or turning two liquids into a smacker – entertainment like this would have leavened the atmosphere a little.

But then again, we were not there for the show, weren’t we. And aside from the points mentioned above, Money20/20 Europe 2019 has been extremely well organized, as always. The timetables unrolled with clockwork precision. What’s more, regular announcements through the speakers informed everyone when important events started.

The most helpful tool provided by conference organizers has been the Money20/20 App, however. As a basic feature, it contained all the necessary information about the event. More than that, it offered you to create your own schedule with workshops, pitches, and keynotes. The app had even notified you when your choices were about to begin. Lastly, the app also turned out to assist networking. It brought you together with people with the same business interests and allowed you to book meeting spaces right away.

These smaller meeting spaces were fully suitable for discussing business.

For Money20/20 Europe 2019 we changed our approach. We arrived a little later than in the years before. That did not hurt us. For this year, we have decided to refrain from maintaining our own booth.

The main reason for this step: Passing trade in the exhibition halls did not meet our expectation last year – an impression other SME directors shared with us, even this year. Money20/20 Europe 2019 featured big halls with large spaces between the booths and different other areas. While this improved the look of the hallways, it also made it clear how much visitors dispersed over the conference. It showed how empty Money20/20 Europe 2019 was in terms of passing trade.

That didn’t mean that Money20/20 Europe 2019 in Amsterdam wasn’t well-frequented. It only meant that booth operators could not compete with the extensive line-up. Talks and keynotes, which lured visitors from the halls away to the stages. The few hours during which the timetables were left blank for networking purposes were really used for having lunch. The problem were the tables in the otherwise appealing food halls. They were simply not big enough to share in larger groups. So having spontaneous, casual business conversations over a burger or a salad proved tricky. The familiar atmosphere from back in Copenhagen was missing in Amsterdam.

Concentrating on meeting new potential business partners as free-roaming visitors, we took to the designated networking areas instead. Once we accepted a meeting invitation in the Money20/20 app, it assigned us a table – we frequented the PayPal Connections Lounge a lot. It all worked out fine, but there is some room for improvement. The next logical step would be a full-fledged matchmaking system – maybe when Money20/20 hits 2020?

We had many interesting meetings! Money20/20 EU remains the place to be in European fintech. At times, it almost felt like a reunion. We met old colleagues and acquaintances, having interesting conversations.

And then sometimes, a meeting turns out quite unexpected. Such was the case with an associate of the Japanese government, who invited us to a meeting. Showing up at the time agreed upon, we realized that we shared the room with a mass of other attendees. The meeting in question was really a head-on keynote.

The Laboratory of Fintech – Keynotes and Talking Points

Placing focus on business meetings, we did not attend many of the varied keynotes, talks, and pitches. But some of them still caught our attention, as they heralded future trends of the industry.

One series of events worth mentioning were the meetings by the European Women Payments Network. The EWPN, a non-profit organization, cast light on the pressing topic of gender equality in the financial industry and specific money markets for and by women.

Aside from gender issues, the question of age structures in financial services also influenced the debate. So did a keynote about the interaction of AI Financial and Automotives, for example. Georg Bauer, Chairman, and Co-Founder of Fair, made clear that the next generation of drivers might not want to buy or lease a car. Rather they would prefer a subscription-based model, just like we know it from today’s online video platforms or coffee flat rate service. With the same flexible cancelation options, of course.

The pitch by the startup company Trezeo took the same line. The company introduced a product targeting the young freelancers and participants in the gig economy. Trezeo offers financial products for people with irregular income. Algorithms analyze spending habits, while overall capital indicates credit standing here, instead of a regular paycheck. We evaluate this as an interesting and very well-presented concept which would strike at a neglected customer base. Eventually, Trezeo came out of the Startup Pitch as the winner.

On the other hand, the blockchain focus of previous Money20/20 conference seems to have flattened out a bit. Still, there were a couple of discussions on blockchain related topics.

We attended an interesting discussion about stablecoins, for instance. Stablecoins are corporate coins and enterprise tokens that try to solve the most painful issue of cryptocurrencies if you’d like to use them as payment instrument: volatility. The value of stablecoins is attached to fiat money (like EUR or USD), but they are not treated as fiat emoney. This gives you the flexibility to avoid specific regulatory requirements. E.g. Binance, one of the biggest cryptocurrency exchanges, doesn’t support fiat fundings. Instead, you can buy USDT coins instead, which are one-to-one matched to USD. If you take interest in the topic, read more about stablecoins in our trimplement blog.

All in all, the wheel of innovation is still spinning in the financial industry. But it could use a little greasing to keep it going. As Samee Zafar, lead partner at Edgar, Dunn & Company from London put it: Fintechs are re-bundling financial services, but they must also keep in mind what problems they are solving and which ones need solving.

The Special Ingredients – What Else Is to Mention About Money20/20

If there is one top-notch aspect of Money20/20 it’s always the catering. Like last year, the first day of the conference featured a Food Festival outside. This assembly of take-away delicacies really struck a cord. Accordingly, the queues were long – a circumstance amplified by the festival’s specific payment system. As a welcome change, the organizers finally switched from (plastic) cash to (plastic) card.  Yet, the cashiers had to manually type in the number written on the card.

In the evening during the second day, Money20/20 Europe 2019 again took it to the streets, just like last year. A row of bars and restaurants in the city was available for attendees of Money20/20 to sit there, drink together and be merry.

This “Street Takeover” only partially fulfilled its promise of being a networking event. Wading to a seat through a cramped pub doesn’t meet everyone’s definition of a pleasure. We define “being merry” at a financial industry conference as having worthwhile conversations with fellow business people. So the concept of “Street Takeover” did not convince us. No wonder then we soon linked the world outside of the RAI to experiences of waiting in queues.

One queue within the conference hall was really worth the wait. The virtual “side-trip” took at ABN Amro’s booth almost provided a relaxing contrast to the constant Money20/20 buzz. Well, at least, if it were not for the upsetting imagery. In a small VR booth, we could take a digital journey through the landscapes of the Earth. The simulation had us see, hear, even smell and feel (through wind channels) how the world changes as we destroy our natural resources. An impactful way of raising awareness for environmental pollution.

Back at our office in Germany, the first thing we did was engaging in follow-up calls and notifications. Our change of strategy actually turned out well, giving us the opportunity to meet more potential business partners at the conference.

But in hindsight, this development also highlights one of the major problems of Money20/20 Europe. It’s still not clear what the focus of Money20/20 is. Does it strive to be a major networking and exhibition hub? Or rather a conference with the focus on keynotes and talks? Don’t get us wrong here: We deem it important that Money20/20 does both. But it’s also crucial to draw attention away from the stages and to the booths and network areas on occasions. It would help make the conference more attractive as a whole. We felt that Money20/20 has to act more as a catalyst for finding business contacts than it does at the moment.

We are certain the organizers can achieve this in the coming years. They only have to change the recipe a tiny bit. It’s not like they would have to create the philosopher’s stone there, is it?

Anything to add? Tell us in the comment section.

We are also happy to hear from you on our other channels. Contact us at info@trimplement.com for more on this. You also find us on Twitter, LinkedIn, and Facebook.