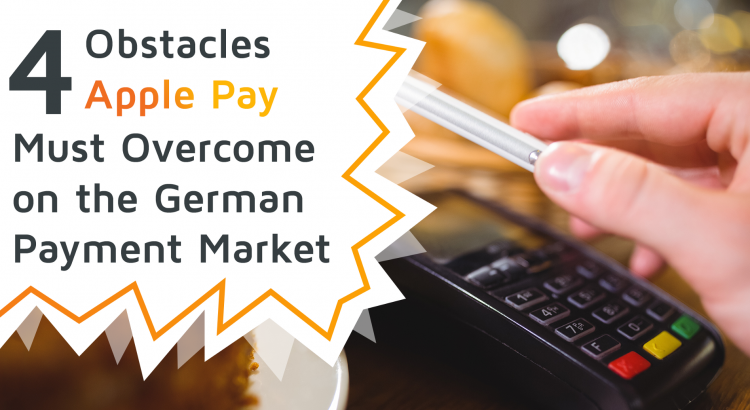 They will point to frictionless paying. To fast access to monetary assets, wherever you are. To tech-savvy China, where almost one-third of the population pays via a mobile device.

And to Apple Pay . The Californian tech giant strives to ban the buck from our pockets and purses. The replacement: A slick mobile payment service.

This would at least help solve an everyday fashion problem: The body mass index of this author’s wallet is respectable — it couldn’t resist all those delish banknotes and coins, credit cards and loyalty coupons. In an average jeans pocket, it doesn’t leave much space for the rest of the young urbanite’s survival kit: keys, headphones and an iPhone.

A chubby wallet is in good company, here in Germany. As of 2016, every German carries around 103 € in cash, as statistics of Deutsche Bank indicate. Physical wallets are an indispensable part of the German financial culture.

Apple Pay, launched in December 2018, offers a solution — and many fintech professionals are euphoric. But the new challenger has to face competitors. In Germany, Google Pay already launched in June. And German banks have a say in mobile payment, too. That said, mobile banking is quite a slow starter in the Bundesrepublik. There are a number of problems Apple Pay will have to face if it wants to dominate the German payment industry. Let’s have a look.

In Germany, there is a rich number of different services on the market. Different in every sense: Mobile payment providers have largely carved out individual niches rather than uniting merchants, banking institutions and platforms under their brand. Prof. Dr. Nikolas Beutin of the Quadriga Hochschule Berlin points out a reason for this: Mobile payment is lacking an overarching technological standard, like os credit card and giro card providers adhere to. More than half of the community members at Banking Hub agree.

Germany is nowhere near a closed technological system right now. That’s mostly because mobile payment initiators are not only banks — not even primarily. Telecommunication companies like Deutsche Telekom and Vodafone have been frontrunners of mobile payments. They ran out of breath halfway. The same is true for the mail-order business Otto.

Still, banks like Sparkasse, Volksbank and Deutsche Bank could not capitalize on their predecessors’ demise. Even launching their solutions way before Apple Pay didn’t help. Basically, German banks all have one thing in common: They don’t cover the whole market and concentrate on a small part of their respective customer base. This goes as far as providing entry points for customers only.

Vodafone created ideal preconditions, partnering up with PayPal. But they stumbled as using their solution required an Android smartphone and a Vodafone mobile contract. This limited the potential customer base.

The same is true for Sparkasse, for example. They created a mobile payment app separate from their mobile banking app. They launched it early to get ahead of the competition. But there is a catch: It’s not available on phones by Apple. Apple doesn’t allow banking apps to communicate with NFC devices.

In numbers, this means that banks don’t reach the iPhone users with their solution. They make up one-fifth of the potential market. It’s worse when you take into the occasion that 60% of users between 18 and 24 use iPhones now. And they are the largest demographic group already using mobile payment and the second-largest considering to do so in the future.

It’s this loophole Google Pay and Apple Pay push forward into. Google is having a head start right now, the hype around the friendly fruit company notwithstanding. It’s because Google Pay did the same like Vodafone, getting PayPal onboard. Around 21 million Germans already have an online payment account at PayPal, linked to their bank accounts. And given that 80% of Germans use an Android smartphone, Google Pay can look forward to accessing a huge potential customer basis.

Very unlike Apple Pay. It has partnered up with many German banking institutes like Deutsche Bank (which even offers a new virtual debit card for use with ApplePay) or fintechs like N26. But two of the most popular banks are hesitant: Sparkasse and Volksbanken/Raiffeisenbanken.

Apple can exercise patience here. Both German banking powerhouses might favor their own solutions, but this will come at the cost of remaining relatively invisible on the mobile payment playing field. Customers don’t overly care whose logo is on a payment app. They care if a solution is working, preferably without much friction. 57 percent of the Banking Hub crowd would even consider changing their banking provider, this would give them access to mobile payment services.

What sets Apple Pay ahead of the competition is the high level of trust the brand enjoys with its target group. The Banking Hub poll places Apple at the very top of mobile payment providers in terms of trustiness — right before the banking institutions. Google Pay lags way behind with only one-third of users trusting them.

The reasons for this can only be speculated about. But it’s evident that trust in the GAFA corporations has eroded since a number of data-related scandals. Apple is the one Silicon Valley giant which has been largely spared of public outrage over such issues so far.

And data protection is the number one criteria for most potential users, as PWC found out in their 2017 Mobile Payment Report. Compliance with data protection rules demands a different approach in Germany and Europe than in the US — let alone in China, where lax privacy laws have helped in the rise of mobile payment there. The General Data Protection Regulation(GDPR) by the EU would not allow many of the applications of data, which are common there.

But make no mistake: Gathering customer data is one of the prime incentives why software and hardware companies like Apple or Alphabet enter the mobile payment market in the first place. Analyzing the transactions and purchases of their users provides a priceless dataset for improving services, customer relations, and advertising. Above all, it’s data which formerly has been the sole privilege of banks.

So we know, why Apple and Google have joined in the payment market. For banks, it’s less about the gathering of transaction data (they have tons of this).

Instead, they hope to reduce costs. 3 out of 4 transactions are concluded using coins and banknotes. Cash is king in Germany. But naturally, such a king has high living costs. Giving out cash at ATMs costs direct banks up to 1,60 € per transaction.

Storing, transferring and (most importantly) minting cash are also considerable expense factors — let alone the damage done by forgers. Some banking institutions have started to restrict money withdrawal at their ATMs, to save a few Euros per customer. What’s more, cash is physical money and thus a way for customers to dodge interest rates — much to the disadvantage of banks.

However, it’s not the desires of banks, which tip the scales for the customers. The payment expert Maik Klotz is certain: Apple Pay, Google Pay and all the other mobile payment apps are solving a problem that doesn’t really exist. It’s true that banks are happy to pass costs deriving from cash storage on to their customers, i.e. via account fees. That doesn’t mean that they stop using cash if they trust this manner of payment.

What’s more, mobile payment via smartphone is not much different from using bank or credit cards. Holding a card or holding a phone in front of a near field communication device is basically the same action — and many retailers and banks offer this option. In Germany, contactless payment is not dependant on Apple’s or Google’s solutions. Additionally, only bills below 25 € can be settled via mobile payment. Everything else requires a pin — and it’s not that much of an improvement to type it into your phone instead of a card reader.

In fact, many payment experts think that German customer might skip the mobile payment step, jumping directly from card readers to biometric payments. Or invisible payments, where retailers automatically charge customers, once they put goods in their consumer baskets in smart internet-of-things-driven stores.

In any case, mobile payment apps must offer clear benefits for customers, such as incentive programs, discounts or reports on one’s own expenses and spending habits. With Payback Pay, there is one mobile payment solution in Germany, which taps this potential, if only cautiously — the app is a side product of the electronic loyalty point system Payback.

Having an app store, a music platform and many other tasty software bits at their disposal, it will be easy for Apple Pay to raise the stakes here.

It has to be seen how the problems Apple Pay must tackle are ultimately solved – or if they will be solved. The most important task for Apple will be to offer customers overvalue far beyond regular payment processes. In terms of sheer access to a broad customer base, Google Pay leads in the race. And both companies are bad news for banks, who struggle to provide either expanded functions or broad market access. But Apple might be glad to add more partners to its already respectable lineup, including Deutsche Bank, Comdirect, Boon, HypoVereinsbank, N26, and O2 Banking, among others.

But what do you think? Will Apple Pay or Google Pay revolutionize mobile payment and help it gather steam? Or will Germany remain a country where the iPhone in your pocket will have to get used to its cash-fat roommate?